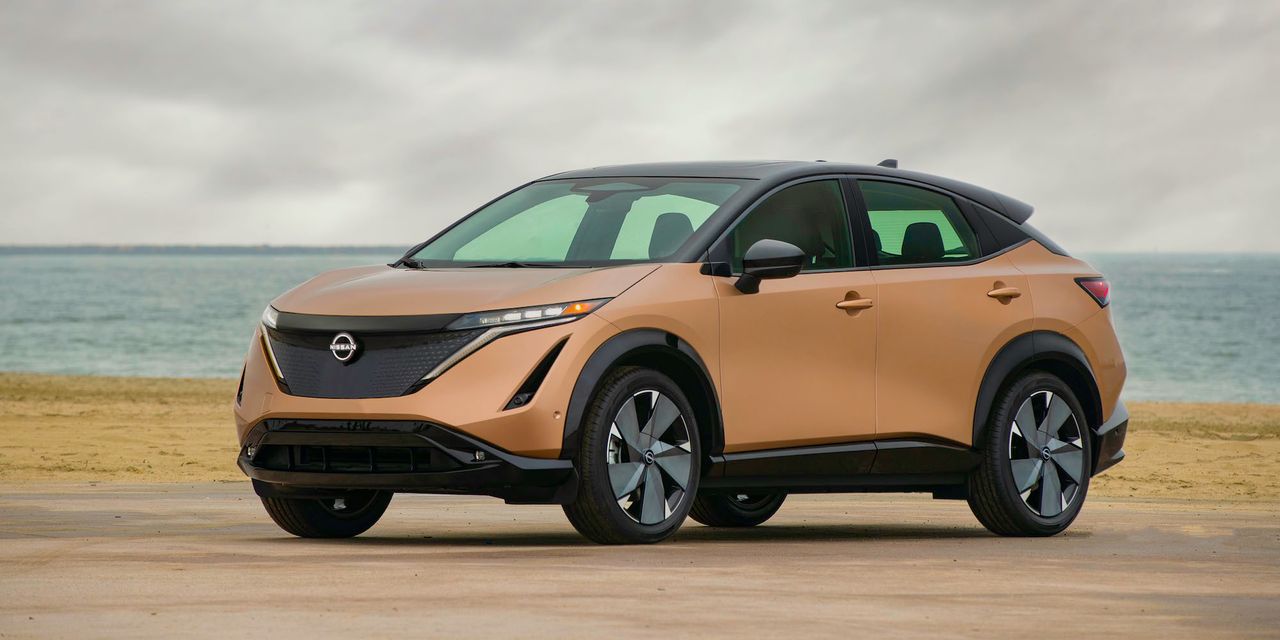 The new electric Nissan Ariya: What’s it like to drive?

If you’re looking for an electric SUV that will duplicate all the sounds and visceral feelings of a gasoline-powered car, the Nissan Ariya isn’t it. In a world of piped-in sounds and electronic exhaust notes, the new 2023 Nissan Ariya goes with “quiet and serene” instead. Is that a good choice? Yes.

has steadily been adding a few models that feel and function more like luxury vehicles than basic, affordable transportation. The Nissan Armada and Murano are perfect examples. The Ariya fits that definition too.

The materials inside are good, but the design, in-car tech, and attention to detail set it apart from other $40,000 electric crossovers. For example, there’s a power sliding center console, hands-free Pro Pilot 2.0, and the use of a backlit Japanese woodworking pattern throughout Ariya’s interior and exterior. Some of the usual automotive interior materials are used in the Ariya, but the overall look is upscale. Nissan calls the new look “Timeless Japanese Futurism.”

The use of flush buttons is another high-tech touch. Rather than have traditional buttons and switches, the Ariya uses buttons that are flush and offer tactile feedback when you press them. The official term is “capacitive haptic switches.” The result is a clean, uncluttered cabin that is both functional and reassuring.

Ariya is the real deal

The introduction of another all-electric car is becoming commonplace. But keep in mind that flashy computer models and dramatic headlines don’t always add up to a real vehicle the public can buy. The Ariya is not vaporware; it’s the real thing. In fairness, it’s a little overdue. We first saw a very production-ready Ariya at the Tokyo Auto Show in 2019. What’s not commonplace is Nissan’s ProPilot 2.0 hands-free driving feature.

Like Super Cruise on some Cadillac, Chevrolet, and GMC models, ProPilot 2.0 allows for long stretches of hands-free driving. The Ariya even includes a power retractable center console so the driver can get more comfortable on road trips where pushing the accelerator and brake pedals are not needed.

Part of ProPilot 2.0 is an automated parking feature that’s good for parallel parking and backing in. This feat is accomplished by pressing a button on the center console.

Read: What buyers of new and used EVs need to know about the new tax incentives

That retractable console is just one of many features that highlight Nissan’s attention to detail. Another is a dash-mounted power storage bin. This bin pops out by pressing a button; it has a lid, so it can also be used as a support for an iPad or even a small laptop — perfect for killing time while waiting for your Ariya to charge.

However, the single feature inside the Ariya that shows just how far designers and engineers went is the charging cord minder near the floor at the bottom of the base of the center console. Why hasn’t this been a feature before? Simply put, it’s a place where you can coil up your USB charging cable when it’s not being used. Or, if you have a longer cable, you can keep part of it wrapped up while you’re charging.

An unmanaged charging cable can interfere with the gear selector and the cupholders and just looks unsightly. iPhone users are treated to wireless Apple
AAPL,

CarPlay, but Android users will have to plug in to mirror their phone’s screen on the in-car screen.

Also on MarketWatch: Biden to Detroit Auto Show: First $900 million to fill gaps in EV charging network is on its way

And speaking of screens, the Ariya has two 12.3-inch screens. One is concave, and one is convex. The screen in front of the driver houses all the usual gauges and information, including a very Tesla-like
TSLA,

graphic interface that shows where other cars are in relation to the Ariya while hands-free driving with ProPilot 2.0. This display is an entirely digital experience; there are no analog gauges. That screen is shaped like a curved TV; it’s slightly concave to allow the driver to see more information at a glance. The secondary screen is convex and joined to the main screen. This design puts the infotainment screen a little closer to the driver than usual, again making it easy to get information at a glance.

This new system has sharp graphics, responds quickly, and is easy to use. If you include the head-up display, technically, there are three screens. The Ariya also includes over-the-air updates, “specifically, software that controls the multimedia system, electric and electronic architecture, chassis, climate system, and EV settings,” according to Nissan.

The big question with any electric car is range. How far will it go on a single charge? With the Ariya, it’s about 300 miles on a single charge. We were driving the Empower+ version with front-wheel drive (FWD). That has an estimated range of 289 miles. The Venture+ version has 304 miles. We expect the top-of-the-line, all-wheel-drive (AWD) performance version to have a range of around 250 miles. As with all-electric cars, that will vary based on driving habits, weather, and terrain.

Thankfully, the Ariya can handle fast charging. Nissan says it should take about 40 min to charge from 20% to 80%. The onboard charger is 7.2 kW. Compare that to a Leaf which is 6.6 kW. The Ariya uses a CCS connector when charging. Both FWD and AWD models offer a choice of 63-kWh or 87-kWh battery capacity.

Read more: What will EV charging look like in the future?

Acceleration is brisk, but it doesn’t quite have that spectacular, almost unending pull you feel in Tesla vehicles. Then again, it’s a safe bet that Nissan opted for battery stability and long life combined with decent range over neck-snapping acceleration. If that kind of “wow” acceleration is what you’re after, get a GT-R. Horsepower varies within the Ariya trim levels. Handling is precise, although you can tell, at times, the Ariya is moving a bunch of weight around. The AWD version will likely be the quickest.

Speaking of the Nissan GT-R, the Ariya’s AWD system is dubbed “e-4ORCE,” and Nissan says it is “born from the company’s rich history of developing memorable all-terrain vehicles and sports cars” and “the spiritual offspring of the Nissan GT-R’s ATTESA E-TS torque split system and the intelligent all-wheel-drive systems found in Nissan’s lineup of crossovers and SUVs.”

It’s not a secret that most electric cars are very quiet. The Ariya is no exception. However, the Ariya feels constructed to a slightly higher standard than other mainstream electric cars. Not only is there, obviously, no engine noise but the road and wind noise are also managed very nicely too. The driving experience combined with the interior materials, shapes, tech, and textures create a very serene environment.

There are distinct driving modes like Normal, Eco, and Sport. Each causes the vehicle to respond in a different way. There’s no piped-in “engine” sound or dramatic sound profiles to accompany the various driving modes. That’s another conscious choice Nissan is making to let serenity trump fun when it comes to the on-road experience.

Also read: The best automotive technologies to look for when buying a new car

On the road, ProPilot 2.0 delivers exactly what it promises; miles and miles of hands- and feet-free driving. It engages with just two steps and handles the driving duties on mapped highways. Unlike Tesla’s poorly named “Full Self-Driving,” the Nissan system is only good on mapped roads or roads in a database. Those are typically divided highways like an interstate. But also, unlike Tesla’s system, you do not have to keep “checking in” with steering wheel inputs.

Nissan uses a color-coded system to let you know when the car is in hands-free driving mode. Both in the instrument panel and via an LED light running all along the base of the windshield. The system will require the driver to take over if certain conditions on the highway are not met. For example, a construction zone or unclear lane markings will cause ProPilot 2.0 to prompt the driver to grab the steering wheel. One interesting note: ProPilot doesn’t just shut off when it senses something only a human can manage. Instead, it steps down one level to adaptive cruise control. This shift is less jarring than other hands-free systems and is only a mild interruption in a long-distance trip.

Read next: Polestar plans to build this gorgeous electric roadster—when can you get one?

Nissan’s 2023 all-electric Ariya SUV is quite good. The quality of the Ariya overall is impressive. The interior feels like a notch or two above the current Murano Platinum. FWD Ariya models will be available first, with AWD versions available later in 2022.

This story originally ran on Autotrader.com.