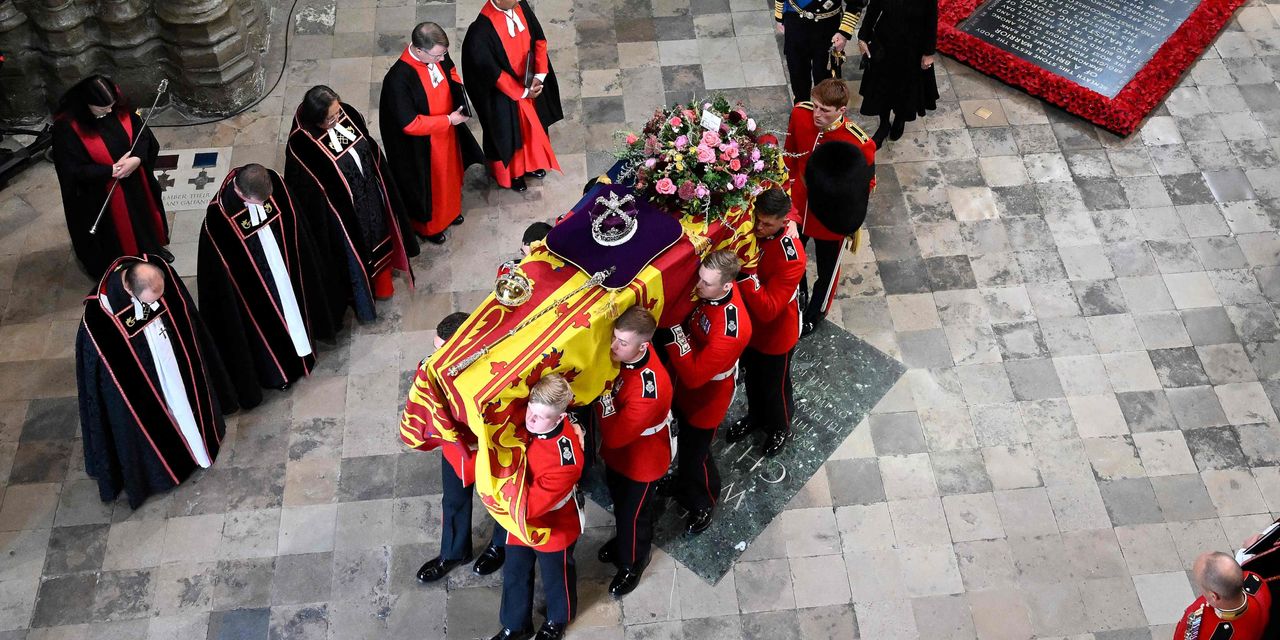 Queen Elizabeth II funeral: Key moments and details, and what they symbolized

Queen Elizabeth II was laid to rest on Monday in a grand state funeral service that drew heads of state from around the world to Westminster Abbey, as well as up to a million mourners lining the streets of London.

The somber run of events, which included the pomp and ceremony befitting Britain’s longest-reigning monarch, featured a royal procession carrying the queen’s lead-lined coffin across London, two minutes of national silence that grounded flights in and out of Heathrow Airport, and some personal touches requested by the late monarch, herself.

The funeral services also mostly played out while many Americans were still asleep, beginning at around 5 a.m. Eastern. For those who may have missed it, here are some of the most memorable moments and details from the final farewell for Queen Elizabeth that people will be talking about for years to come.

At roughly 10:45 a.m. local time (5:45 a.m. Eastern) the queen’s coffin was carried out of the Palace of Westminster and borne by the State Ceremonial Gun Carriage of the Royal Navy for two miles through London’s streets toward Westminster Abbey.

Some 142 Royal Navy sailors towed and accompanied the two-and-a-half ton ceremonial carriage, which is a duty the Royal Navy has performed since the funeral of Queen Victoria in 1901. But there’s even more significance here: the queen herself was the daughter of a naval officer, she married a naval officer, and one of her first duties as queen was the Fleet Review in 1953, the Royal Navy noted. “This is the Royal Navy’s opportunity to say ‘thank you’ for her dedication and her service,” said Rear Admiral Jude Terry, Director People and Training, on behalf of the Royal Navy.

The funeral procession was led by drummers and bagpipers from the Scottish and Irish regiments, and senior members of the royal family, including King Charles III and his sons Prince William and Prince Harry, followed the gun carriage in the procession.

The queen’s coffin was covered in symbolism

The flag draping the coffin was the Royal Standard, which represents the sovereign and the United Kingdom. (This is the flag that would be seen flying whenever the queen was in residence at one of the royal palaces.) There are four quarterings on the flag: England is represented on the first and fourth quarters by three lions and a pheasant; Scotland is shown on the second quarter with a lion rampant; and Ireland is represented with a harp in the third quarter.

The Imperial State Crown, the Sovereign’s Orb and Scepter — all considered Instruments of the State, and part of the Crown Jewels — were placed atop the Royal Standard on the coffin. The queen wore this crown at her 1953 coronation; it’s considered priceless, made of gold and set with 2,868 diamonds, 17 sapphires, 11 emeralds, 269 pearls and four rubies.

The orb and scepter date back to 1861, and were both also presented to the queen at her coronation. And the scepter — a three-foot-long gold rod — holds the world’s largest colorless cut diamond: the Cullinan I. It symbolizes good governance. The orb is a gold sphere surmounted by a cross, illustrating that the monarch’s power is supposed to be derived from God.

The coffin itself was also weighty enough to bear one of Britain’s greatest monarchs. It was reportedly made decades ago from English oak and weighs a quarter of a metric ton, or 550 pounds — although it could weigh up to 700 pounds. And in keeping with royal tradition, it is lined with lead to prevent decomposition.

Prince George and Prince Charlotte were part of the funeral procession

The two eldest children of the Prince and Princess of Wales performed a sober royal duty during the funeral service.

Prince George, 9, and Princess Charlotte, 7, marched with their parents, Prince William and Princess Catherine, behind their great-grandmother’s coffin as it entered Westminster Abbey. They are the second and third in line to the British throne, after their father. Their younger brother, Prince Louis, did not attend the state funeral.

Princess Charlotte was wearing a small diamond brooch in the shape of a horseshoe, which many observers believe is a nod to Queen Elizabeth II’s love of horses.

King Charles had a hand in picking the sustainable funeral bouquet.

The queen’s funeral wreath featured flowers and foliage cut from the gardens of Buckingham Palace, Clarence House and Highgrove House, at the king’s request. And every sprig and petal stands for something. It contained rosemary for remembrance, as well as myrtle as a symbol of a happy marriage — and which was cut from a plant grown from a sprig of myrtle that was used in the late queen’s wedding bouquet in 1947.

The bouquet also included English oak, representing the strength of love. And there were also scented pelargoniums, garden roses, autumnal hydrangea, sedum, dahlias and scabious in shades of gold, pink and deep burgundy, with touches of white, to reflect the Royal Standard flag that the bouquet lied on atop the coffin.

What’s more, the king requested the wreath be made more sustainably by being set in a nest of English moss and oak branches, rather than floral foam.

Queen Elizabeth II lived for 96 years (and held the throne for 70 of them), and so Westminster Abbey’s Tenor Bell was first struck at 9:24 a.m. local time on Monday, and then tolled once a minute for 96 minutes until the beginning of the funeral service at 11 a.m. Each strike of the bell was to honor each year of her life.

The funeral choir honored Her Majesty’s love of music

The Choir of Westminster Abbey was joined by the Choir of His Majesty’s Royal Chapel, which is based at St. James’s Palace, to perform at the queen’s funeral. And in keeping with the other aspects of the services on Monday, each hymn was deeply personal. They included “The Lord’s My Shepherd, I’ll Not Want,” which was sung at Queen Elizabeth’s wedding to Prince Philip, the Duke of Edinburgh, in 1947. They also sung “Love Divine, All Loves Excelling,” which has been featured in several royal weddings, including at King Charles’s wedding to Queen Consort Camilla, and at Prince William and Princess Catherine’s royal nuptials.

The music also included a piece composed specifically for the funeral; a setting of Psalm 42, “Like as the hart” composed by Judith Weir, the master of the queen’s (now king’s) music.

Two minutes of national silence were observed across the United Kingdom

Toward the end of the funeral service, two minutes of silence were observed in Westminster Abbey, as well as throughout the United Kingdom. Cameras on the street during the service saw the crowds standing soundlessly. Heathrow Airport also cancelled more than 100 flights to avoid the sounds of planes overhead disturbing the funeral; no flights were allowed to take off or land from 15 minutes before the silence started until 15 minutes after it ended.

The queen’s piper played a traditional lament, at the late monarch’s request

The state funeral service ended with the U.K. national anthem, followed by the Sovereign Piper playing the lament, “Sleep, dearie, sleep.” The piper was also set to play later on Monday, when the queen’s coffin was lowered into the royal vault at St. George’s Chapel in Windsor Castle. And this was a personal request by the queen, Buckingham Palace said.

Queen Elizabeth made her final journey through London

Following the state funeral service, the queen’s coffin was carried by the State Ceremonial Gun Carriage of the Royal Navy through London once more, with Big Ben tolling at one-minute intervals throughout the procession, along with the King’s Troop Royal Horse Artillery firing off a gun salute from Hyde Park each minute, as well. The coffin was carried toward Wellington Arch, where it would be transferred to the State Hearse and taken to Windsor Castle for a more intimate committal service at St. George’s Chapel.

At the end of the committal service, the Imperial State Crown, the orb and the scepter will be removed from the queen’s coffin, and placed on the altar. And after the final hymn, the Lord Chamberlain will “break” his Wand of Office and place it on the coffin, signifying that his service to the queen has ended. King Charles III will don the Imperial State Crown and take the orb and scepter at his future coronation.

Later, in the early evening, senior members the royal family were scheduled to have a private service, and the queen’s final resting place will be in the King George VI memorial chapel, which is a small annex to the main chapel at Windsor. This is where Queen Elizabeth’s parents were buried, and where the ashes of her sister Princess Margaret are kept. And the remains of her late husband, Prince Philip, will be moved to join the queen at the memorial chapel.